Cart escalators could take retail construction to next level Have you ever been in a store that provides shopping cart escalators?

Shoppers who witness this conveyance system for the first time are enthralled at the novelty.

Whole Foods Market built its one and only store in Milwaukee on the east side. It was built on a tight site with no surface parking options and in an area of Milwaukee that is notorious for being a very difficult place to park. The problem was solved with underground parking and shopping cart escalators.

However, these cart escalators are not the new-fangled contraptions that Whole Foods introduced for the first time in my little corner of the world. In Europe, where construction real estate is at a premium and they must build up rather than spread out, cart escalators are old hat. For instance, the Vermaport Cart Conveying System manufactured by Darrott in Germany has been around for more than 30 years.

By all accounts, it was Target that introduced the cart conveyor to the U.S. in 1995 when it built a two-level store on a tight spot in La Mesa, Calif., near San Diego. It was so successful they were able to move forward with more multi-level stores. One of them is under construction now in Madison at the Hilldale Mall. Walmart and other large retailers have followed suit.

In these multi-level stores, shoppers can move back and forth between levels of the store and to their cars in the underground parking with great ease (shoppers accompany their moving shopping cart on an escalator that runs parallel to and at the same speed as the cart escalator).

Of course, this opens new opportunities for construction when a large retailer isn’t “boxed” in by lack of available space traditionally required for the one-story building/surface parking combination. Developers can now look at smaller sites in urban areas allowing access to denser populations. But they don’t need me to tell them that – it’s happening already.

• Did you know that the trademark name “Escalator” lost its proprietary status and the capital “e” in 1950 when the U.S. patent office ruled the word had become just a common descriptive term for moving stairways?

Here’s hoping you have more ups than downs in 2011.

Ann Knoedler is the lead data reporter at The Daily Reporter. She’s excited about the latest in escalator design: the levytator. 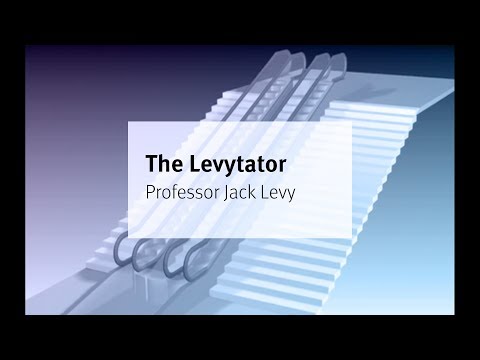