The ongoing controversy over Justice Ann Walsh Bradley’s allegations that Justice David Prosser choked her during an argument June 13 ballooned to new heights Thursday when an inflatable balloon intended to bear a resemblance to Prosser made its way to Capitol Square. 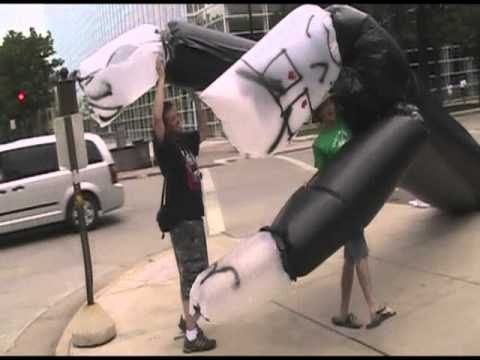 According to the Milwaukee Journal Sentinel, the 25-foot-tall balloon was created by Miles Kristan, who shouted, “Watch out, Justice Prosser might try to choke you,” at people walking nearby Thursday afternoon.

Authorities are investigating Bradley’s allegations, which Prosser denies. He has vowed silence during the process, saying the truth will come out eventually.

The inflatable was deflated by late Thursday afternoon. Did faux Prosser blow away? Or did Kristan simply decide he had enough for the day? Who knows.

But, here’s wondering: If you came across the balloon in the future, would you stop and laugh, or would you reach for a sharp utensil?

Previous: HUD program offers aid to avert foreclosures
Next: WisDOT to close I-94 lanes near Zoo Interchange on Monday