John Hamann walks near his home in Milwaukee recently. A man who always saw him walking the same route started a Facebook fan page, nicknaming Hamann "Milverine" because of his resemblance to the Wolverine movie and comic book character. The page has amassed more than 2,500 followers who post photos and the whereabouts of Hamann. (AP Photos by Carrie Antlfinger)

Milwaukee — An opera-loving, cage-fighter-in-training has attracted a cult following after stories and pictures were posted on Facebook of the muscular mystery man who frequently is spotted walking shirtless through Milwaukee.

Tim Panicucci, 35, was so curious about the focused man he’d see speed walk past his workplace every day that he started the fan page about a year ago. And because of his hairy resemblance to the comic book character Wolverine and his shark-like movements on the streets of Milwaukee, Panicucci and his friends chose the nickname the Milverine. Construction worker John Hamann poses with a copy of an "X-Men" movie in the backyard of his Milwaukee home.

Since then, the page — filled with fan photos — has amassed about 2,500 fans from Milwaukee and around the world.

The Milverine’s actual name is John Hamann, and the 48-year-old construction worker who lives with his mother says he doesn’t mind the attention. While he doesn’t use computers, he recently learned of the Facebook page when someone stopped him.

“It just kind of amuses me, you know? That’s all I can think about it,” he said. “Somebody wants to take a picture and I say, ‘OK.’ You know, it’s over with, you know.”

Hamann walks — usually shirtless when it’s warm — the same route for two to three hours a day. And he’s trying to keep his weight down to become a cage fighter. He loves opera because of the strong voices.

Hamann said he had intervened several times when had seen people being attacked, but he didn’t compare himself with fictional superheroes such as Wolverine. And he’s no fan of Hugh Jackman, the actor who plays that role on film.

“He’s a phony movie actor, but I’m the real deal, you know?” he said. “Seriously. These movie actors most of them, besides maybe Chuck Norris or Steven Seagal, all these guys are basically phony guys. They couldn’t really fight in real life.”

Panicucci said he started the Facebook page simply because he wanted to know more about the Milverine.

“My wife thinks I should stop because she likes to have the mystique about him, not knowing about him makes him more iconic in her eyes,” he said. “I’m interested in hearing people’s stories, their backgrounds, where they come from, what made them who they are today.” 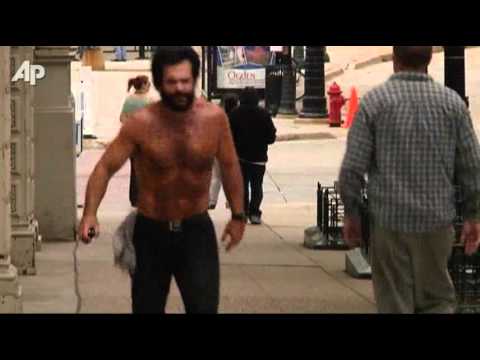 Previous: JobTrac Alert: Meeting Tuesday for mechanical systems, services contract
Next: That dog is driving up my property tax