Trending
Home / Top Projects of 2011 / Crossing that bridge: Highland Road Bridge over I-43

Crossing that bridge: Highland Road Bridge over I-43 Timing is everything in most construction projects and that definitely was the case during the summer of 2011 as crews replaced the Highland Road Bridge over Interstate 43 in Mequon.

In addition to worrying about affecting travel on the highway and a nearby Union Pacific Mainline rail line, crews had to make sure they got the project done before school started up at nearby Concordia University.

“We had to shove a lot of work into a short timeframe, but we got it done and we got it done early,” said Brad Abraham, a project manager for Brookfield-based R.A. Smith National Inc. “We were dealing with a lot of challenges, but there was a huge sense of urgency. Throughout the project as issues arose, we were able to shift gears easily and get the job done.”

In a little more than two months, crews were able to take down the old bridge and put up a six-span bridge, said Nathan Check, director of public works for the city of Mequon.

“The early completion resulted in significant benefits to the residents and Concordia, as well as the general traveling public in the area,” he said. “In addition, since the bridge spans over I-43 and the railroad, impacts to the freeway traffic and railroad were reduced as a result of the early completion.”

The Highland Road Bridge provides a critical link to Mequon’s east-side residents and Concordia University. Once construction started, a four-mile detour was needed in addition to road closures on the highway below. Abraham said a lot of coordination was needed to make sure the work didn’t affect the rail line and utilities. “Of course, we had to be aware of the highway traffic patterns on 43 too,” said Abraham, adding that all work had to be approved by the rail line to ensure trains were not impeded.

Mother Nature threw the project a big curve when temperatures soared into the high 90s just as crews were planning to pour the concrete deck. Crews adjusted by working at night, which in retrospect was a benefit for I-43 drivers.

“The bridge fits seamlessly into its surroundings and is aesthetically pleasing,” Abraham said. “We were able to improve not only the bridge’s function, but also how it looks.” 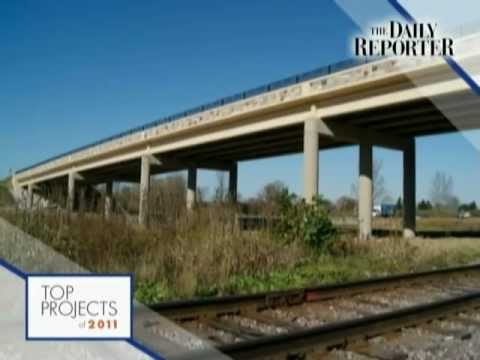