Riding the financial wave: Saint John’s On the Lake Saint John’s on the Lake project thrives after downturn After navigating rough financial seas, the $50 million Saint John’s on the Lake expansion project not only survived, it’s thriving.

That milestone is sweeter given that just a few years ago the project was on hold because of the economic downturn and difficulties putting together a financing package.

Saint John’s already had a 10-story, 110-unit overlooking Lake Michigan. The facility offered assisted living and skilled care to seniors. In 2005, they began doing market studies, surveys, and initial design for a second tower offering senior apartments. In November 2007, they began pre-selling those apartments. Six months later they had presold 75 percent of the units, the amount the state required for Saint John’s to get its tax-exempt bonds.

That’s when the economy changed and the credit market closed down.

“We weren’t able to put together a financing package for an entire year,” said Renee Anderson, the president of the community.

She acknowledged that every day they wrestled with the question of whether to move forward. They were encouraged by what they viewed as a strong commitment from those who made deposits. In the end, they only lost 30 percent of those who committed, a number Anderson said was below the national average.

Anderson attributes their ability to hold onto depositors to Saint John’s reputation and its dedication to letting residents participate in the design of the new tower.

“What we do that’s considerably different from most other retirement communities is we allow residents to design their own space,” Anderson said.

The result, Anderson said, is unique apartments that reflect the choices of those who live there.

Ursula Twombly, principal-in-charge from Continuum Architects and Planners SC in Milwaukee, was proud of being able to stick with the project. They were getting close to finishing paperwork when the market collapsed, she said. Saint John’s was strong enough to hold on during the economic downturn. That was not the case for many construction projects.

“A lot of projects just died,” Twombly said. “I think it was unique for this client to be able to actually pull this out and get it financed in these times. They worked very, very hard to make it happen.”

Saint John’s finally put together a financing package in October 2009 and the project was completed less than two years later. 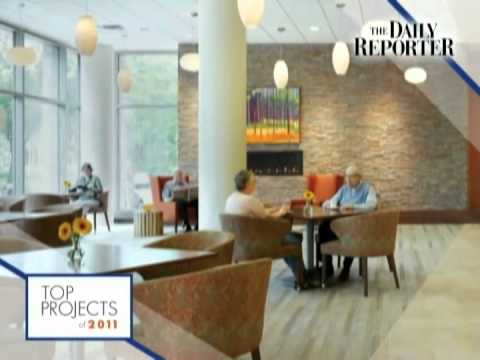