St. Catherine’s Medical Center’s three-story vertical expansion not only made the building taller, it made it stronger.

The $80 million expansion, which was completed this past summer in Pleasant Prairie, provided more than 300,000 additional square feet to what began as a two-story hospital. The facility now has four stories plus a fifth-floor mechanical penthouse.

The original structure was built to support a two-story expansion under an older state building code, said Dan Kilbert, a principal with Graef-USA Inc., Milwaukee.

Due to the size of the mechanical penthouse, the crew had to take a look at the foundations and how much weight the roof, floors and columns could bear. Some of the columns, for example, had to be reinforced.

Crews also had to adapt to changing building codes. The state had transitioned to a new code system, the International Building Code, which had specific earthquake requirements. “A hospital is considered an essential facility,” Kilbert said, “and the IBC says that a hospital must be functional and operational in the event of an earthquake.”

The new code gave designers and contractors direction, he said, on how to calculate the seismic forces for the building design.

In addition to tackling the IBC and additional size, the crew had to deal with another challenge: working while the hospital remained open.

“We kind of hopscotched around the building,” said Ben Kossow, division manager for Riley Construction Co. Inc., the project’s construction manager. “The census was down and we were able to shuffle patients from wing to wing.”

The build team and hospital staff worked together to simulate a crisis so they would be prepared for just about anything. In addition to the two teams, members of the fire and police departments, as well as Flight
for Life, were also involved.

It was that group effort that made the project team as strong as the building they helped assemble, Kossow said.

“If we didn’t have the willingness to work together as a group,” he said, “the project wouldn’t have been so successful.” 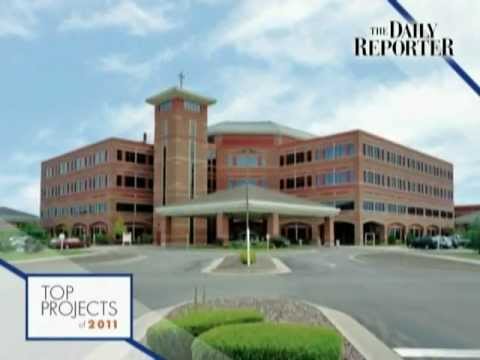