He won’t officially step down until February, but Lyle Balistreri already is benefitting from retirement.

“My blood pressure is a little lower these days,” said Balistreri, president of the Milwaukee Building & Construction Trades Council for nearly 18 years.

His 45 years in construction began with an apprenticeship in the U.S. Navy Reserve and included 10 years as an organizer and representative with the Electrical Workers Local 494. For the past 25 years, Balistreri has negotiated more than $7 billion in union construction work on such major projects as Miller Park, the Potawatomi Bingo Casino and hotel, the then-named Midwest Express Center, the Marquette interchange and the state’s newest power plants.

Despite that background, and his experience as a foreman, estimator and project manager, Balistreri said the trades’ council presidency took time to grow into.

“The big thing was being able to shut up and listen,” he said. “There’s a time and a place for everything. I’m sure there are people out there who have seen me have some of my famous outbursts, and they were calculated.

“If the soft touch doesn’t work, then you get a little tougher. You take it as far as you can without breaking the law.”

Balistreri might have a reputation as a gruff labor leader, but it is his softer side that often leaves an impression, said Earl Buford, president and CEO of the Wisconsin Regional Training Partnership/Building Industry Group Skilled Trades Employment Program in Milwaukee.

“He has probably the biggest heart of anyone I’ve ever known personally or professionally,” Buford said. “Whenever we have an awards program or graduation event, not only is Lyle always there, but he’s actually pretty emotional about how much the program has grown and how much it helps the industry.”

He oversaw construction of Bradley Tech High School in Milwaukee and plans to take over raising money for the school. He also plans to focus on workforce development with WRTP/Big Step. Lyle Balistreri, president of Milwaukee Building & Construction Trades Council, laughs while
talking with peers during a Sept. 24 meeting at the council headquarters in Milwaukee.

Balistreri talks on the phone in his office. 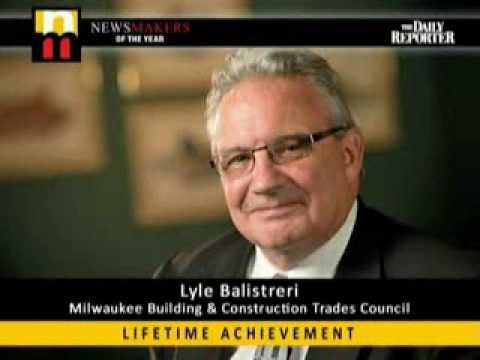