Trending
Home / 2013 Newsmakers of the year / Tomsyck driven by results Making something from nothing is a source of pride for many individuals, but Mark Tomsyck, senior project manager for M.A. Mortenson Co., takes this one step further.

“We build buildings but they’re really just buildings. Seeing how it helps the customer’s businesses and how they can get the most utilization out of the building and put a structure to use is something I’m proud of,” he said, specifically referencing the Sealed Air Family YMCA in Mount Pleasant.

During his more than 15 years in the construction industry, Tomsyck has worked on a wide variety of projects, from hotels to company headquarters, including a recently completed office building renovation for Northwestern Mutual Life Insurance Co. The project involved the complete interior renovation of a seven-story downtown office building as a part of the company’s continuing Campus Connection initiative.

“We’re able to work with the best of the best,” Jenalyn Groeschel, facility project consultant for Northwestern Mutual, said. “Mark is definitely a part of that.”

Throughout his career Tomsyck said he has taken a great deal of pride in several projects, but said a few hold special interest. As an avid baseball fan, his work on the renovation of the Miller Park scoreboard was particularly enjoyable.

His greatest pride, however, is his award winning work on the American Transmission Co. headquarters in Pewaukee.

“It was my first LEED certified building and had both an office component and a data center component so it was a very intensive construction process,” Tomsyck said. “I think at the end of the day that was a very successful project from a construction perspective but also from an operational standpoint.”

Perhaps the most gratifying part of his career however, is sharing the end result with his family.

“Seeing and having the permanent result is something that’s pretty satisfying,” he said. “Something I can take my kids by and point at the building and say, ‘I worked on that one.’” 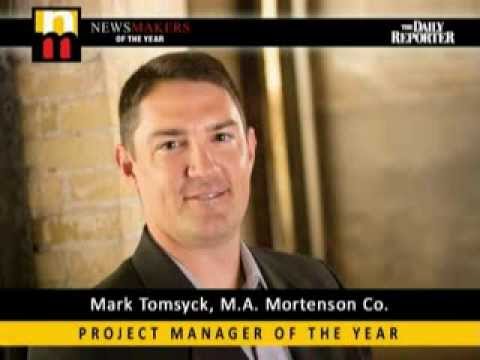