Universities are seeing an increase in female architectural students, but Ursula Twombly says women architects are few and far between.

“For some reason, and maybe there are many of them, women are studying architecture in school, but then not going out and joining firms and rising through the ranks,” said Twombly, who along with fellow female architect Falamak Nourzad owns more than 50 percent of Continuum Architects and Planners SC in Milwaukee.

Twombly does what she can to support the next generation by donating to scholarships for female architecture students. And she, Nourzad and Robert Barr all serve as mentors to students and architects right out of college.

Continuum’s variety of projects — including the University of Wisconsin-Milwaukee Freshwater Sciences building, the Chazen Museum of Art at UW-Madison, Milwaukee’s St. John’s on the Lake and the National Avenue Lofts — offers a variety of opportunities, Twombly said.

“It’s cool for young people to get that exposure to the many different aspects of architecture,” she said. “They can be involved at every stage of a project.”

While the firm has projects across Wisconsin, Continuum has completed several projects, including the Clock Shadow building, near the front door of its Walker’s Point office.

“It’s our neighborhood and we want it to be a great place,” Twombly said. “The neighborhood has grown up around us since we moved in 17 years ago.”

Barr said the firm has “a real commitment to both its neighborhood and the city of Milwaukee to help it prosper and grow. We’re just committed to designing great spaces.”

And if more women were involved in the designing process, that would suit Twombly just fine.

“We may be women-owned, but we operate just like any other firm,” she said. “We work as a team together with our staff as well as work as a team with the developer, the construction firm and anyone else involved in the project.”

“We’re often hailed as the best women-owned architect firm,” Twombly added, “but why can’t it just be best architect firm? … Our goal is to be the best.” 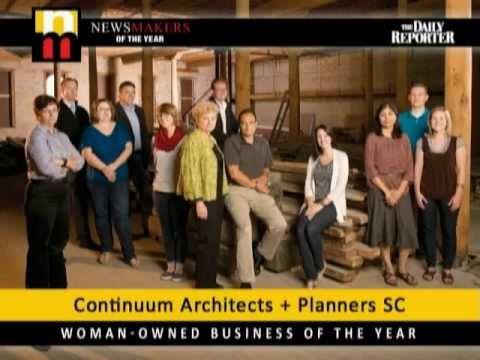