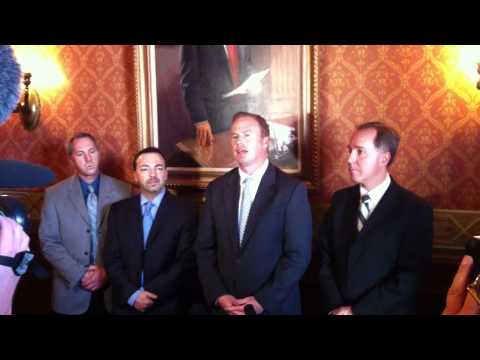 Republican leadership said Monday it was prepared to insert into the budget measures that would eliminate most collective bargaining rights for public workers unless the High Court ruled on the bill, which had been blocked by circuit court judge Maryann Sumi because of concerns over the state’s open meetings law.

Without having to address the collective bargaining issue again, Fitzgerald said the Assembly budget debate could be much smoother.

“Obviously, after going through 63 hours of debate on the floor over this bill, I wouldn’t say I was looking forward to doing it again,” Fitzgerald said. “We knew we probably had to do it again if the court had not decided.”

Instead, though, Fitzgerald said the legislative chamber could stick to items that had not already been passed once before.

“I think (the Supreme Court decision) will shorten up the debate on the floor,” he said. “Now we can stay focused strictly on the state budget.”

“The Supreme Court’s ruling provides our state the opportunity to move forward together and focus on getting Wisconsin working again,” Walker said.

Democrats, however, were less enthusiastic about the court’s ruling. Rep. Kelda Helen Roys, D-Madison, questioned its integrity in a Twitter message.

“Timing of decision is uncanny,” she said. “I’ve no confidence in court’s independence. They’re acting in close concert with (Wisconsin) GOP.”

Previous: Wisconsin budget could pass with extraordinary speed
Next: Republicans vote against WiscNet before they plan to vote for it