The replacement bridge for the closed northbound U.S. Highway 45 span on the Zoo Interchange will open at 5 a.m. Friday. Wisconsin Department of Transportation Secretary Frank Busalacchi announces northbound U.S. Highway 45 at the Zoo Interchange, which was closed last Friday, will re-open at 5 a.m. Friday. The announcement was made during a press conference Wednesday at Milwaukee's Intermodal Station. (Photo by Sean Ryan)

“We feel that we have done the right thing,” said Frank Busalacchi, Wisconsin Department of Transportation secretary. “We have accelerated the construction of this bridge.”

WisDOT on Friday closed the existing Highway 45 bridge on the interchange because it was cracking and could not safely support traffic.

The contractors accelerated the construction schedule for the Highway 45 bridge to finish building it this week, Busalacchi said. The project was completed quickly because builders could use the space on the closed bridge to work, worked around the clock and dropped work on the other bridges, Busalacchi said.

The price of the company’s contract will increase because of the shorter schedule for the Highway 45 bridge, Busalacchi said.

“It won’t be close to a million,” he said, adding that the department does not yet have detailed numbers on the cost increase. 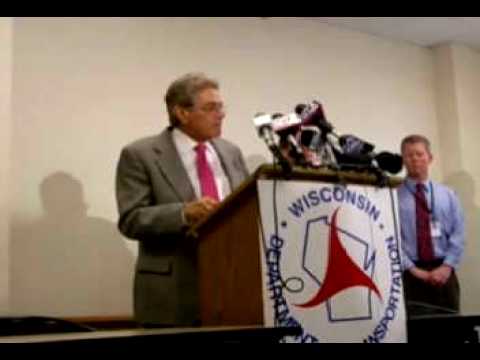